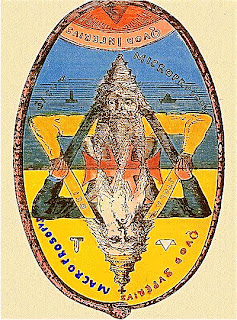 AS BELOW, SO ABOVE
In our Western culture we have been brought up to assume that Life sprang from one-celled organisms evolving into more complex structures.  In other words, we evolved from the ground up.
Descartes echoed this concept, stating that we are of the earth, and the mind was just a reflection of the body:  As Below, So Above.
“I suppose the body to be just a statue or a machine made of earth".
- René Descartes.  The World and Other Writings (1633), trans. and ed. Stephen Gaukroger (1998), 99.
"Even the mind depends so much on temperament and the disposition of one's bodily organs that, if it is possible to find a way to make people generally more wise and more skillful than they have been in the past, I believe that we should look for it in medicine.
- René Descartes.  Discourse on Method and Related Writings (1637), trans. Desmond M. Clarke, Penguin edition (1999), Part 6, 44.
So the concept was born that the mind is a reflection of the body, but separate from the body.  Now there is no question that science has provided us with a great wealth of knowledge and amazing resources to sustain health and well being, however, this mind/body split also has some very limiting aspects:
-”Physical” illnesses are seen as being authentic diseases.  As a culture we continue the double standard, considering conditions related to emotional health as weaknesses or lapses in character....something that we should be able to overcome, unlike cancer or a bad appendix.
- According to Herbert Benson, sixty percent of physician visits are related to mind/body, stress-related issues, however, the interventions offered in those settings are typically medication or surgery.


- Yoga, an Eastern practice that does not embrace this divide, is often co-opted by the Western model and approached as physical exercise...while postures are only a fraction of what constitutes yoga.
- And in our American culture, a byproduct of believing the body trumps the mind is that action is valued over stillness.
We can't help but unconsciously subscribe on some level to these prejudices, as they are imbedded in our society.  It is one of our cultural patterns or samskara:  the subconscious residue and impressions formed from our environment and experiences. 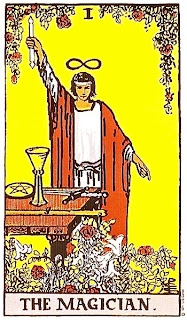 AS ABOVE, SO BELOW
In contrast to the Western philosophies, Eastern thought has always supported the idea that matter is formed and shaped by the non-physical: that all springs from consciousness and that all things are connected.
Research in the field of quantum physics has provided a link between East and West.  For example:


"When forced to summarize the general theory of relativity in one sentence: Time and space and gravitation have no separate existence from matter." Albert Einstein  (The Theory of Relativity)
"A careful analysis of the process of observation in atomic physics has shown that the subatomic particles have no meaning as isolated entities, but can only be understood as interconnections between the preparation of an experiment and the subsequent measurement. Quantum theory thus reveals a basic oneness of the universe. It shows that we cannot decompose the world into independently existing smallest units. As we penetrate into matter, nature does not show us any isolated ‘basic building blocks’, but rather appears as a complicated web of relations between the various parts of the whole." Fritjof Capra (Fritjof Capra, The Tao of Physics, On Quantum Theory)
In the field of health, the last decade has been filled with literature and research showing how thought and MINDset influence recovery, physical vulnerability, overall wellness and our ability to heal.  While many allopathic practitioners agree to treat stress-related conditions through yoga, meditation and energy work as a last resort, the bridge between our cultural viewpoint and those of more ancient times continues to grow.
I invite you to entertain the belief that there is great value in joining these Western and Eastern principles....that our physical body is influenced by our thoughts, and that our thoughts can be influenced by intervening with the physical body.
Nancy Samotis, LICSW, RYT Nancy Samotis, MFA, LICSW, RYT at 10:57 AM

Nancy,
I appreciate your thoughtful reflections and wise connections to mind and body integration that is so pertinent to living a vital, balanced life in a highly distractable, stressful culture.
Thank you and I look forward to reading more .....
-Holly 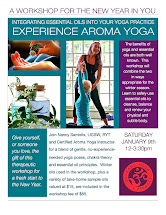 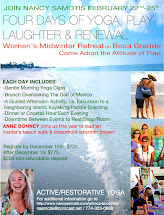 You May Make Payments Here

Nancy Samotis, MFA, LICSW, RYT
Brewster, MA
As a Psychotherapist, Yoga Instructor and Artist I focus on the therapeutic application of yoga in my work with individuals and groups.